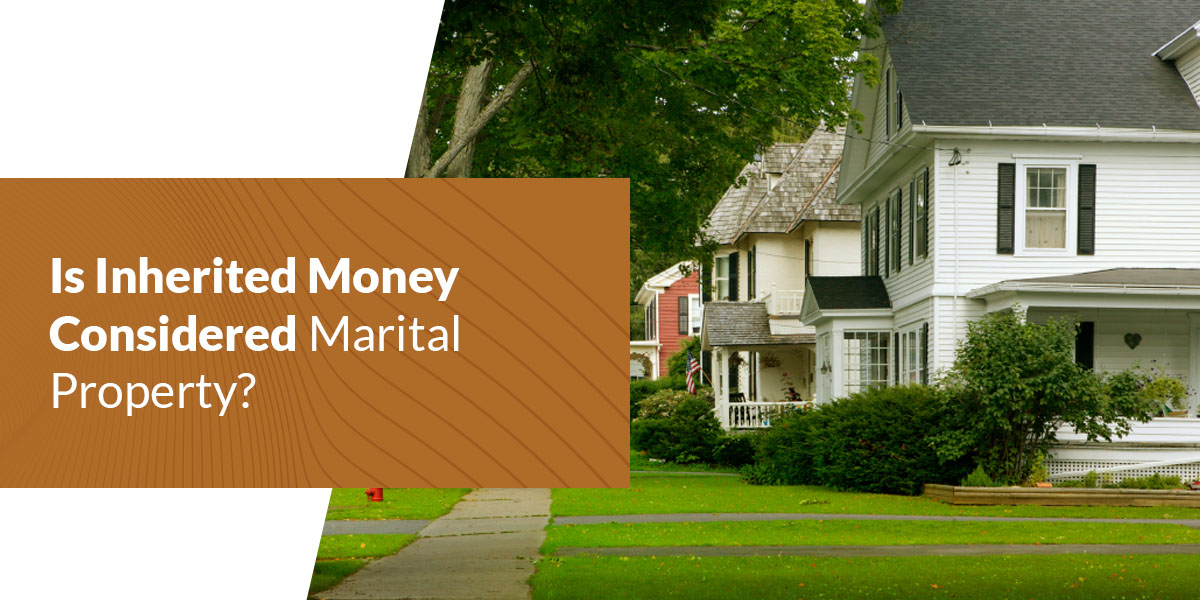 Shared finances and property in a marriage can be confusing, and these concepts become even more complicated during a divorce. After the court grants a divorce, the couple’s assets must be divided between each of them.

If you’re in line for an inheritance, you’ve probably wondered if your inherited money is considered a marital asset. With such a large sum of money at stake, it makes sense that you’d want to know if your spouse has any right to it, especially if you’re in the process of filing for divorce.

Through this informative guide, you’ll learn about the relationship between inheritance and marriage and whether your inheritance is considered marital property.

There are two primary types of property in a marriage — community property and separate property. Before you can understand which applies to your inheritance, you must first know the difference between the two.

What Is Community Property?

Community property includes all of the following assets:

What Is Separate Property?

Though most property that an individual obtains during a marriage is considered community property, inheritance is one of the few exceptions to this rule. Because inheritances are generally considered separate property belonging to the person who received them, they are not subject to equitable distribution and may not be divided between spousal parties during a divorce. That means your spouse is not entitled to your inheritance regardless of whether you received it before or during your marriage.

While it’s entirely possible to maintain separate ownership of an inheritance, there are also instances where inherited money could be community property according to inheritance and marriage rules. There are two instances in which your inheritance may be jointly owned by you and your spouse  — commingling and transmutation.

Commingling describes when separate property and community property become mixed together. These assets are jointly owned by both partners in a marriage and are available for both parties to use, meaning the couple can use them to pay expenses incurred by either partner. That means if one spouse commingles their inheritance with marital property, their partner may have a claim to it.

For example, if you deposit a cash inheritance into a joint checking account that both you and your spouse use, the inherited money becomes commingled and may be considered jointly owned if you were to get divorced. 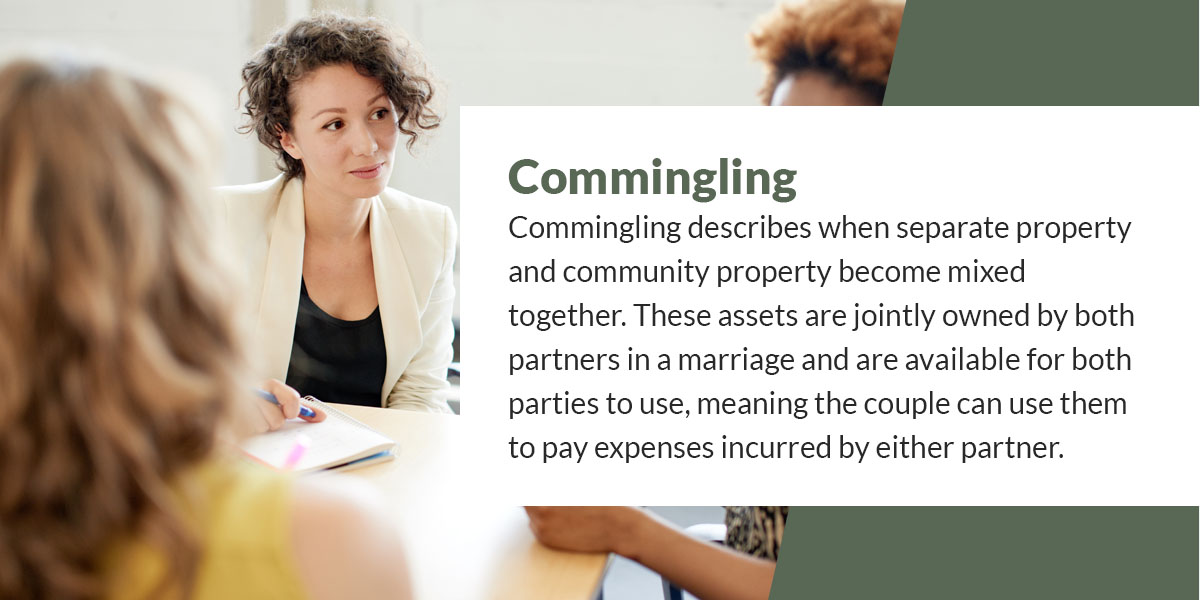 Transmutation is when an asset’s status changes from separate to community. For example, when separate property is retitled in the names of both spouses, it undergoes transmutation and becomes marital property. Likewise, inherited money used to purchase jointly owned assets with a spouse is also subject to transmutation.

The good news is that some courts will accept commingled inheritance assets as separate if you can demonstrate that you never intended to share the money, in which case, the assets will not be transmuted. While this contest requires a high burden of proof, it’s possible with the right attorney on your side.

For example, if you deposited your inheritance into a joint account for the sake of convenience and your spouse was aware of this reasoning, the inheritance would remain separate due to the intent of the transfer.

Tips for Maintaining an Inheritance in a Marriage

If you’re an heir to an inheritance and wish to keep it separate from your spouse, there are various ways you can do so. When managing an inheritance in a marriage, be sure to keep the following tips in mind:

If your inheritance is stuck in probate, Inheritance Funding can get it to you fast. We help heirs get the money they deserve immediately through our simple and efficient probate advance process. Our services are risk-free and will never affect your credit score, not to mention there’s no interest, monthly payments or collateral required. All we do is charge a fixed fee with our low price guarantee.

We’ve advanced over $200 million to heirs across the nation, and we want to do the same for you.

Contact us to learn more about our inheritance advances today! 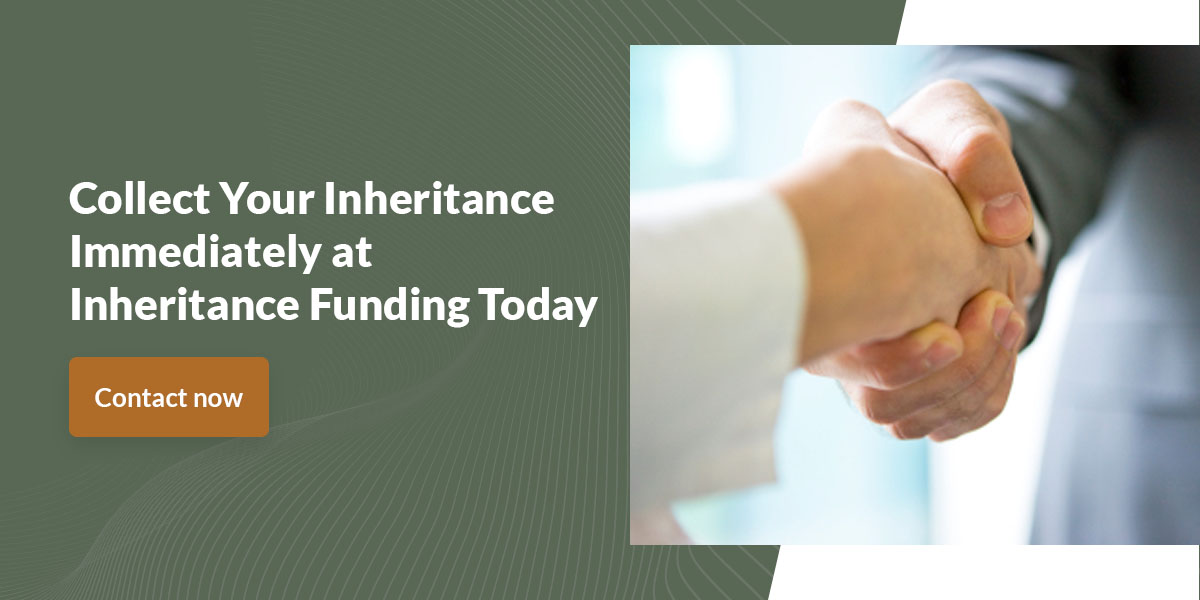 Why Wait? Get Your Inheritance Now!

Why Wait? Get Your Inheritance Now!

Fill out the following form to receive a free, no obligation quote on an inheritance cash advance. Our friendly staff is here to serve your needs and will gladly answer any questions you may have.
If you still feel more comfortable sharing information directly over the phone, call us toll free anytime:

We guarantee any information you provide, whether here on the website or over the phone, is protected and secure in compliance with our strict Privacy Policy.

A+ Rated by the Better Business Bureau for Over 20 Years!

A member of our expert team will contact you as soon as possible to guide you through the fast and easy process.

We look forward to working with you to find an advance right for you.

Want to get started immediately?